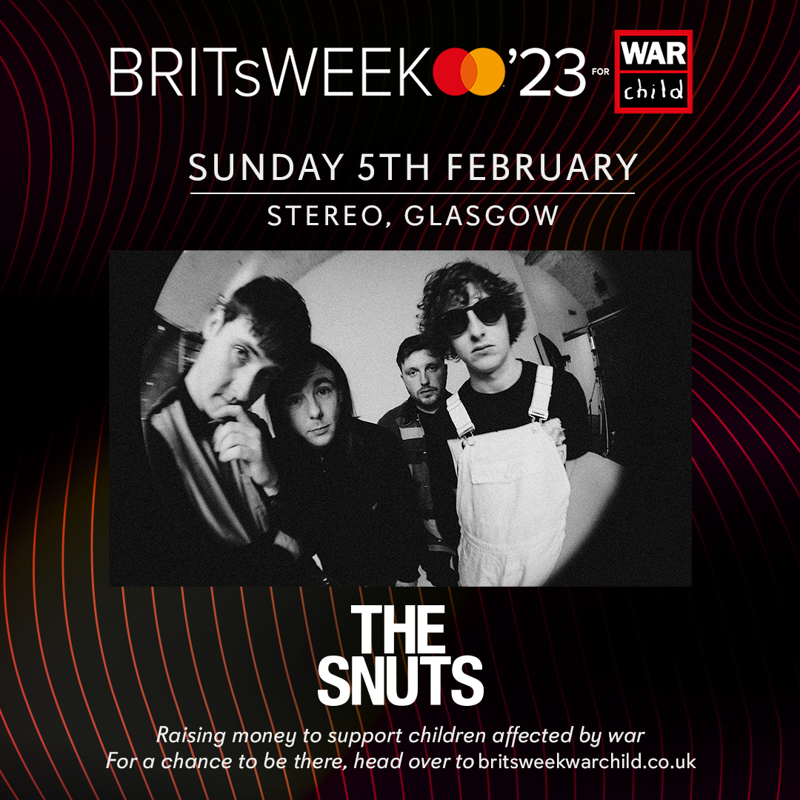 BRITs Week presented by Mastercard for War Child returns in 2023 with another incredible series of gigs, giving fans the opportunity to see some of the biggest and most exciting names in music in intimate venues across the UK – all whilst raising money for children whose lives have been torn apart by war. BRITs Week shows will take place around The BRIT Awards 2023 with Mastercard on February 11 to celebrate another remarkable year in British music. Kicking things off on January 29 at Lafayette will be UK rock outfit The Hunna. On February 1, Metronomy will be playing songs from their renowned catalogue at new London venue HERE at Outernet, followed by the phenomenal, chart-topping Years & Years on February 2. Following her acclaimed debut album this year, Beabadoobee will be playing at Lafayette on February 3, the same night as 2022 Mercury Prize shortlisted Kojey Radical will take to the stage at east London’s XOYO. Cambridge’s critically acclaimed bedroom pop artist Cavetown will play at Omeara on February 4, with Scottish four piece The Snuts then taking BRITs Week to Glasgow, performing at Stereo on February 5. Indie-pop’s easy life will be heading down to Bristol for an unforgettable show at Trinity Centre on February 7, while back in London Sea Girls will bring their renowned live energy to the iconic 100 Club. Chart-topping singer-songwriter Frank Turner + The Sleeping Souls will play at London’s O2 Shepherds Bush Empire on February 9, then finishing things off in style on February 10, 2021 BRIT Rising Star nominee Rina Sawayama will turn her electrifying live performance into a stunning acoustic show at London’s Lafayette and genre-blending duo Bob Vylan will be playing tracks from their new Kerrang! Award & MOBO winning album at Omeara. Line-up announced so far: January 29 - Raw Power Management Presents The Hunna - Lafayette, London February 1 - Metronomy - HERE at Outernet, London February 2 - Years & Years - HERE at Outernet, London February 3 - Beabadoobee - Lafayette, London February 3 - Kojey Radical - XOYO, London February 4 - Cavetown - Omeara, London February 5 - The Snuts - Stereo, Glasgow February 7 - easy life - Trinity Centre, Bristol February 7 - Sea Girls - 100 Club, London

February 9 - Xtra Mile Recordings 20th Anniversary with Frank Turner + The Sleeping Souls - O2 Shepherds Bush Empire, London February 10 - Rina Sawayama - Lafayette, London February 10 - Bob Vylan - Omeara, London More acts on the 2023 line-up will be announced in January! BRITs Week is produced by AEG Presents, BPI and War Child, the charity for children affected by conflict. The event series is sponsored by Mastercard, headline sponsor of The BRIT Awards.  Proceeds from the shows will help to support War Child’s work that aims to reach children as early as possible when conflict breaks out and stay to support them through their recovery - keeping them safe, helping them learn and cope with their experiences, and equipping them with skills for the future. To enter the prize draw and win tickets to see the artist of their choice, fans can make a £5 donation for one entry, a £10 donation for three entries, or a £15 donation for five entries, to War Child. To maximise the chance of winning, fans can enter as many times as they like. Click HERE for the prize draw which is open now. See the website for more details on the prize draw’s closing dates. There will also be a limited number of tickets for each show on sale. Tickets in the War Child pre- sale will be available at 9AM on December 15 for all those who subscribe HERE before 23:59PM on December 14. Tickets will be on general sale from 09:00AM on December 16.

Austen Cruickshank, Senior Live Music Manager at War Child says “We are thrilled to be working with BPI, AEG and Mastercard once again on another BRITs Week series. The 2023 shows feel particularly special for us as we also celebrate our 30 th anniversary as a charity and look back on everything we have been able to do for children affected by conflict around the world, thanks to the unwavering energy and passion of the music industry. With conflict rates on the rise, and more children at risk, our work as a charity is truly never more needed so we are excited to bring this amazing roster of talent to some incredible venues across London and the UK, to create more unforgettable music moments and raise much needed funds to support our work now, and for the future.”   Maggie Crowe OBE, BPI’s Director of Events & Charities says “Announcing this brilliant line up with more names joining the class of BRITs Week 2023 early in the New Year is just joyous. Music is therapy for the soul and listening to amazing artists of all styles and backgrounds in intimate venues is exactly how this special annual event works to raise much needed funds for War Child – in what will be their 30 th anniversary year. Our thanks to all the artists and their teams and to our valued friends and partners for making BRITs Week possible.” Simon Jones, Senior Vice President, Live Music International, at AEG says “Bringing back BRITs Week each year is always exciting, and for 2023, we’re going even further afield across the UK to bring very special underplay shows to people. Our AEG team and partners at BPI, War Child and Mastercard have all clubbed together to help create another incredible series, for what is a fantastic industry fixture year in year out, raising much needed funds for a very important charity, War Child. The line-up keeps growing, and there’s even more to come, so keep your eyes peeled.”   Agnes Woolrich, VP Marketing & Communications, Mastercard UK and Ireland says: “Over the last 25 years of partnership with the BRIT Awards, our aim has always been to celebrate talent and performances, bringing fans closer to the artists and music they love. We are proud to return as headline partner of this year’s series of unique BRITs Week performances, in support of War Child. With the devastating conflict in Ukraine ongoing, the charity’s work has never been more important, and we are honoured to extend their mission and message to millions of Mastercard cardholders.”