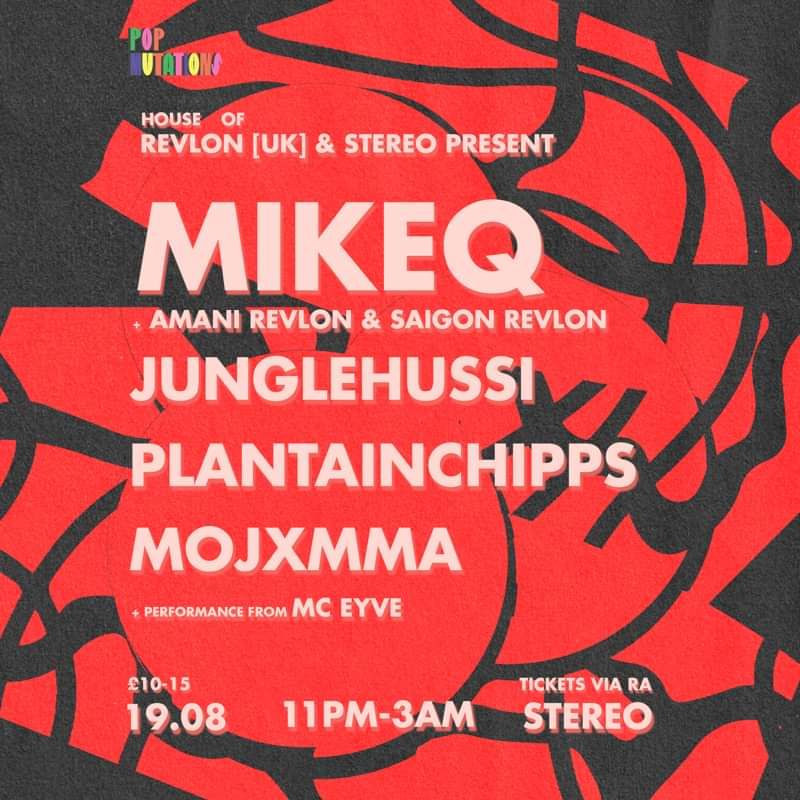 Stereo and Scottish Chapter of the Iconic house of Revlon are so excited to welcome MikeQ back to Glasgow on 19th August with a heavy local lineup, with profits from the event going to two of our House Ball Scotland sisters: Purina Alpha and Medea.

Our QTIBIPOC-focussed two-floor party and celebration of underground ballroom culture will take over over the venue from 11pm, where we're beyond hype to be joined by:

MikeQ [Fade To Mind/Qween Beat|], Is an American Artist and is one of the leading figures of the US's long-running (but still largely underground) ballroom/vogue-house culture. Based in New Jersey, the 34 year old producer is not only one of the busiest DJs, but he also heads up ballroom cultures first record label, ‘Qween Beat’. and turns out a steady stream of vogue and ballroom tracks, re-edits, and remixes.

He has also headlined at Major Museums Such as Amsterdam’s Stedelijk, NY’s Moma PS1, Whitney, and Brooklyn Museum, NJ’s Newark Museum as well as The Philadelphia Museum Of Art to name a few. He has scored for films and TV shows such as ‘Kiki’ Movie and Viceland’s ‘My House’. MikeQ is also set to appear on film as the DJ on HBO Max’s ‘Legendary’ as well as FX’s 3rd Season Of ‘Pose’. He and His Qween Beat label currently host a monthly party / ball ‘House Of Vogue’ in Brooklyn bringing an additional safe space to the culture.

La Cheetah resident and regular on Glasgow’s local Clydebuilt Radio Junglehussi has been making noise on the Glasgow club circuit since 2016 making a mark for himself with his genre stretching sets.. Real name Matthew Arthur Williams who is also a photographer and artist has long since been warming up for the likes of Honey Dijon and Joy Orbison, and Robert Owens and coordinating his own nights. 2022 saw a return to the Riverside Festival line up, and can be seen playing the festival circuit throughout the UK and beyond.

Mojxmma (Mo-Jam-ma) is an Edinburgh/Glasgow based club night run by resident DJs Jam Eye and Halal Kitty. Mojxmma showcase local QTIPOC+ talent in their line-ups and track selections - expect genre-blending of modern and old school Rnb and hip-hop with dance and electronic beats to bring you that queer house party feel.