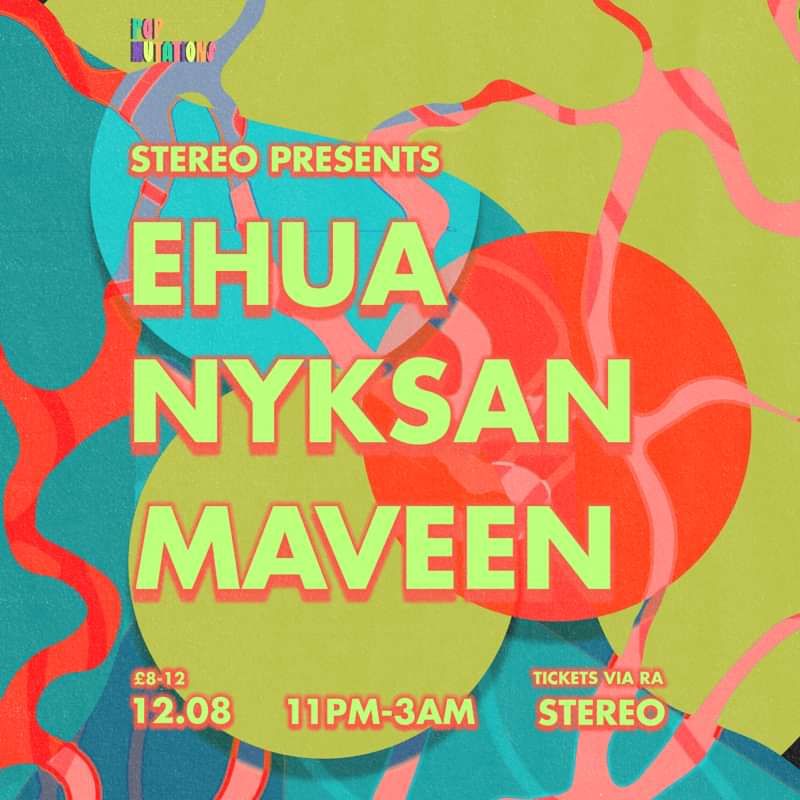 Stereo is excited to kick-start August 2022 programming with no other than TraTraTrax founder Nyksan, joined by Ehua, following the release on the same label. On support duties is Glasgow's legend and co-founder of Shakara, Maveen

Italian-Ivorian producer and DJ Ehua has been making waves since the release of her 2018 debut EP, ‘Diplozoon’ on Femme Culture. She’s since remixed records for Ninja Tune, played at some of Europe’s most iconic festivals and holds down a regular show at Radio Raheem Milano, where she explores the percussioninfluenced realms of experimental techno each month. Recent releases include ‘Aquamarine’ via Nervous Horizon, an EP inspired by both the colour and motion of water, and ‘Venom’, single part of Cutcross’s V/A CXT003 ‘With The Pulse’. Away from club music, Ehua also retains a life-long interest in the arts and has composed a series of soundtracks for short films and artistic performances, as well as being part of GRIOT — a collective and influential online media hub focusing on arts from Africa and its diaspora.

Nicolás Sánchez aka Nyksan is a Colombian producer and DJ based in London. He is the co-founder of TraTraTrax, a label focused on the crossover between Perreo (as a form of Latin American resistance) and future electronic music narratives. He also runs Unterbog, a Colombian based project and a milestone of the Colombian techno music scene in the past decade as well as being the co-founder for Ambient label Hoy Records.Recently Nyksan has played for HOR, Boiler Room, NTS Radio, as well as being a resident at Brilliant Corners and played at Sónar, Ars Electronica, Baum Festival, Festival Estéreo Picnic and many other parties. He has just finished a tour with Nicola Cruz as part of his TraTraTrax showcase around Colombia. One of his most recent projects is Sacrificio, an immersive, virtual interdisciplinary installation, commissioned for Elenchus/Gallery 46 in London.

Ugandan born, Glasgow-based DJ, radio host, curator and club promoter. MAVEEN! has proven over the years to be an impressive selector performing genre-defying sets leaving dance-floors in a frenzy. A professed lover of music not genres, his versatile approach to mixing means that his sets are always packed with energy and variety. This has seen him support the likes of Prosumer, Horse Meat Disco, RAW SILK, Maurice Fulton, TAAHLIAH, Jeremy Sylvester, Inkke, Sherelle, Yazzus, Interplanetary Criminal, Shy One, MINA, Tash LC, and Groove Armada to name a few.