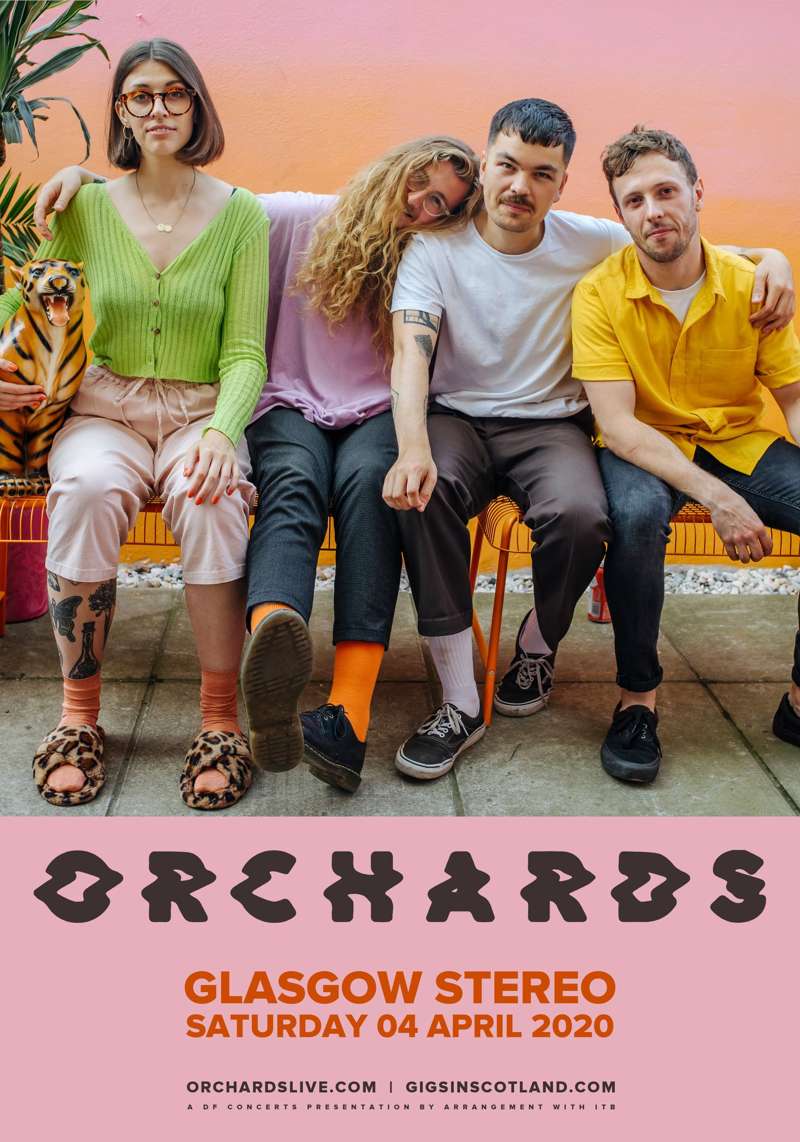 £8 STBF
Entry Requirements: over 14s (under 16s must be accompanied by an adult)
Buy Tickets

Born from Brighton’s diverse musical breeding ground, indie quartet Orchards are among the city's brightest rising stars. Comprised of lifelong friends Sam Rushton (guitar) and Dan Fane (bass/vocals), who met drummer Will Lee-Lewis and vocalist Lucy Evers within their first week at university, the band are a resplendent mix of summer melodies and stellar hooks that threaten to be stuck in your head for days. Married with an unbreakable bond that makes the four-piece inseparable, they form a sound that is inherently positive, charming, shimmering and above all: fun. Armed with a luscious catalogue that has seen praise from BBC Radio 6 Music, BBC Radio 1 and NME — with Huw Stephens championing the band as “'Ones To Watch” — their 2018 EP ‘Losers/Lovers’ is perhaps a collection of their rawest material studded with fan favourites, from the electrifying ‘Peggy’, ‘Honey’’s ode to the collapse of the world’s bee colonies, to summer anthem ‘Luv You 2’ and the sultry ‘Drama King’. In March 2019, the band released a 7” featuring two new songs ‘Young’ and ‘Mature Me’, knocking the bands songwriting and musicianship up a gear giving them the chance to explore their fusion of math pop time signatures and pop inspired vocals to produce a sound bigger, brighter and more ambitious than ever before. Their energetic live show — which often sees Evers treat the venue as her personal playground — has taken them across the globe, playing shows in the UK and Europe, selling out their debut London headline show, support slots with Hippo Campus, Fatherson and Pom Poko as well as packed out slots at The Great Escape Festival, Y Not Festival, TRUCK FESTIVAL, and 2000 Trees Festival among many others. In the spring of 2019, Orchards set their sights on conquering SXSW and The New Colossus Festival in New York, gaining media attention from the likes of Alternative Press, DIY and Noisey and propelling them with a drive and momentum to return in 2020. Orchards are bashing down the doors of the indie world with no intention of slowing down. Armed with a slew of bangers and ballads alike, they’re a band whose work ethic and creative outgoings make them one of the most exciting bands around, but more importantly a shining beacon of catharsis, anthems and hope.